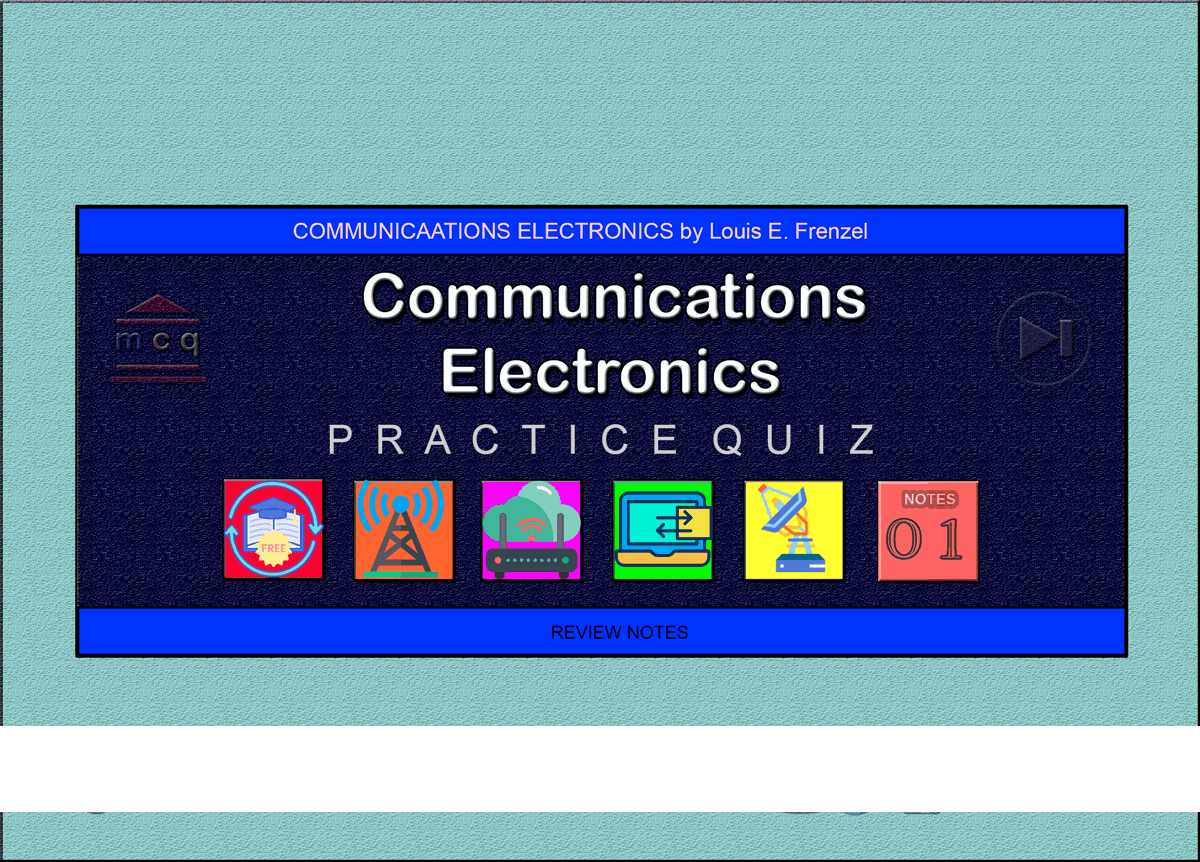 This is the summary notes of the important terms and concepts in Chapter 1 of the book COMMUNICATIONS ELECTRONICS by Louis E. Frenzel. This book introduces basic communication concepts and circuits, including modulation techniques, radio transmitters and receivers. It also discusses antennas and microwave techniques at a technician level and covers data communication techniques (modems, local area networks, fiber optics, satellite communication) and advanced applications (cellular telephones, facsimile and radar). The work is suitable for courses in Communications Technology. The notes are properly synchronized and concise for much better understanding of the book. Make sure to familiarize this review notes to increase the chance of passing the ECE Board Exam.

1. The three major fields of electronics are computers, communications, and control. The computer segment is the largest; communications is the second largest.

2. Communication is the process of exchanging information.

3. Most human communication is oral, but a great deal of it is also in written or printed form.

4. The two main barriers to communication are language and distance.

5. Major electrical discoveries in the mid- and late nineteenth century made possible the development of electronic communications over long distances.

6. The telegraph (1844) and telephone (1876) were the first two long-distance communications systems.

7. Radio was discovered in 1887, and wireless telegraphy was demonstrated in 1895.

8. Electronic communications plays a vital role in all our lives and is essential to the success of our information society.

11. Radio waves are signals made up of electric and magnetic fields that propagate over long distances.

12. Noise is any interference that disturbs the legible transmission of a signal. Noise is produced by the

13. The transmission medium greatly attenuates and degrades the transmitted signal.

14. Electronic communications may be either one-way or two-way. One-way transmission is called simplex or broadcasting.

15. Two-way communication is called duplex. In half-duplex communications, only one of the two parties can transmit at a time. In full duplex, both parties may transmit and receive simultaneously.

16. Information signals may be either analog or digital. Analog signals are smooth, continuous voltage variations such as voice or video. Digital signals are binary pulses or codes.

17. The information signal, called the base band signal, is often transmitted directly over the communications medium.

18. In most communications systems, the base band signal is used to modulate a higher-frequency carrier signal than is transmitted by radio.

19. Modulation is the process of having an information signal modifies a carrier signal in someway. Common examples are AM and FM.

20. The base band signal cannot usually be transmitted through space by radio because the antennas required are too long and because multiple base band signals transmitting simultaneously would interfere with one another.

21. Multiplexing is the process of transmitting two or more signals simultaneously over the same channel or medium.

22. Besides TV, there are several other methods of transmitting visual or graphical information; they are facsimile, videotex, teletext.

23. Simplex transmission of special signals from land-based or satellite stations is used by ship and airplanes for navigation.

24. Telemetry is measurement at a distance. Sensors convert physical characteristics to electric signals which modulate a carrier transmitted to a remote location.

25. Radio astronomy supplements optical astronomy by permitting the location and mapping of stars by the radio waves they emit.

26. Radar uses the ‘reflection of radio waves from remote objects for the detection of their presence, direction, and speed,

27. Underwater radar is called active sonar. Passive sonar is simply listening underwater for the detection of objects of interest.

29. Data communications is the transmission of computer and other digital data via the telephone system, microwave links or satellite.

31. Interconnections of PCs for the exchange of information are called local area networks.

32. The electromagnetic spectrum is that range of frequencies from approximately 30 Hz to visible light over which electronic communications takes place.

33. The greatest portion of the spectrum covers radio waves, which are oscillating electric and magnetic fields that radiate for long distances.

34.Wavelength ( ) is the distance (in meters) between corresponding points on successive cycles of a periodic wave: A= 3OO/f (f is in megahertz). It is also the distance that an electromagnetic wave travels in the time it takes for one cycle of oscillation.

36. Amplitude-modulated broadcasting occurs in the MF range from 300 kHz to 3 MHz.

37. The high-frequency range (3 to 30 MHz), or shortwave, is used for world Wide two way communications and broadcasting.

38. Television broadcasting occurs in the VHF and UHF ranges.

39. Frequencies above 1 GHz are called microwaves.

40. The SHF and EHF bands are used primarily for satellite communications and radar.

41. Those frequencies directly above 300 GHz are called millimeter waves.

42.Electromagnetic signals produced primarily by heat sources are called infrared. They cover the 0.7- to 100 m range.

43. A micron is one millionth of a meter.

45. An angstrom is one ten-thousandth of a micron.

46.Bandwidth is the spectrum space occupied by a signal, the frequency range of a transmitted signal, or the range of frequencies accepted by a receiver. It is the difference between the upper and lower frequencies of the range in question.

49. In the United States, the FCC regulates the use of the spectrum and most forms of electronic communications according to the Communications Act of 1934.

50. Most countries belong to the ITU, an organization devoted to worldwide cooperation and negotiation on spectrum usage.

51. The NTIA coordinates government and military communications in the United States.