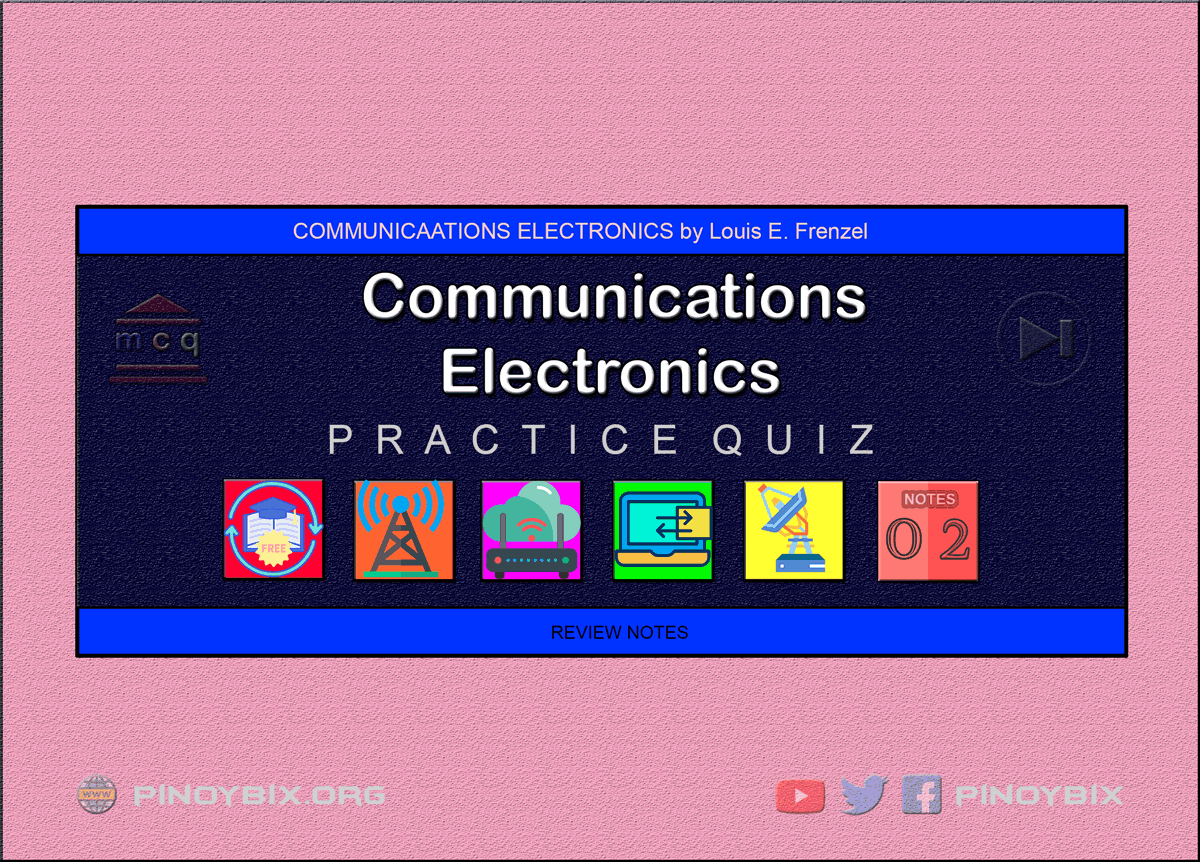 This is the summary notes of the important terms and concepts in Chapter 2 of the book COMMUNICATIONS ELECTRONICS by Louis E. Frenzel. This book introduces basic communication concepts and circuits, including modulation techniques, radio transmitters and receivers. It also discusses antennas and microwave techniques at a technician level and covers data communication techniques (modems, local area networks, fiber optics, satellite communication) and advanced applications (cellular telephones, facsimile and radar). The work is suitable for courses in Communications Technology. The notes are properly synchronized and concise for much better understanding of the book. Make sure to familiarize this review notes to increase the chance of passing the ECE Board Exam.

1. Modulation is the process of having the information to be communicated modifies a higher frequency signal called a carrier.

2. Amplitude modulation (AM) is the oldest and simplest form of modulation.

4. The amplitude variation of the carrier peaks has the shape of the modulating signal and is referred to as the envelope.

5. A time-domain display shows amplitude versus time variation of AM and other signals.

6. Amplitude modulation is produced by a circuit called a modulator which has two in puts and an output.

7. The modulator performs a mathematical multiplication of the carrier and information signals. The output is their analog product.

9. The ideal value for m is 1, Typically m is less than 1. The condition where m is greater than 1 should be avoided as it introduces serious distortion of the modulating signal. This is called overmodulation.

10. When the modulation index is multiplied by 100, it is called the percentage of modulation.

11. The percentage of modulation can be computed from AM waveforms displayed on an oscilloscope by using the expression

where Vmax is the maximum peak carrier amplitude and

12. The new signals generated by the modulation process are called sidebands and occur at frequencies above and below the carrier frequency.

13.The upper fUSB and lower fLSB sideband frequencies are the sum and difference of the carrier frequency fC and the modulating frequency fM and are computed with the expressions

14. A display of signal amplitudes with respect to frequency is called a frequency-domain display.

15. An AM signal can be viewed as the carrier signal added to the sideband signals produced by AM.

The power in each sideband is

17. The higher the percentage of modulation, the greater the sideband power and the stronger and more intelligible the transmitted and received signal.

18. Despite its simplicity and effectiveness, AM is a highly inefficient method of modulation.

20. An AM signal with suppressed carrier is called a double-sideband (DSB) signal.

22. An AM signal with no carrier and one sideband is called a single-sideband (SSB) signal. The upper and lower sidebands contain the same information, and one is not preferred over the other.

23. The main advantage of an SSB AM signal over an AM or DSB signal is that it occupies one-half the spectrum space.

24. Both DSB and SSB signals are more efficient in terms of power usage. The power wasted in the useless carrier is saved thereby allowing more power to be put into the sidebands.

25. Power in an SSB transmitter is rated in terms of peak envelope power (PEP), the power that is produced on voice peaks. PEP output is computed using the expression

where PEP is in watts and V is the rms voltage across the antenna load impedance R. The PEP input is computed using the expression

where Vs is the de supply voltage of the final amplifier stage and Imax is the amplifier current on voice peaks.

26. The average output of an SSB transmitter is one-fourth to one-third of the PEP value.

27. Frequency conversion is a form of AM used to translate signals to higher or lower frequencies for improved processing.

28. Frequency conversion is carried out by a circuit called a mixer or converter.

29. The mixer performs analog multiplication of the input signal and a local oscillator signal.

30. The frequency conversion process faithfully retains any modulation (AM, PM, etc.) on the input. The translated signal contains the same modulation.

32. Either the sum or the difference frequency is selected with a filter, while the others are rejected.

33. The process of mixing is also known as heterodyning.