Set theory is the branch of mathematical logic that studies sets, which informally are collections of objects. The modern study of set theory was initiated by Georg Cantor and Richard Dedekind in the 1870s.

A set is any well defined collection of symbols or objects. The objects comprising the set are called elements or members.

REPRESENTATION OF A SET

Tabular Form – all the elements of the set are written in braces ( ), each one of them are separated by a comma.

If set A is a set of counting numbers, then:

Set Builder Form – the elements are not written explicitly but their characteristic properties are stated and written within braces.

If set A is a set of natural numbers less than 12, then:

Finite Set – a set containing a finite number of elements.

Infinite Set – a set containing an infinite number of elements.

Singleton – a set having only one element (unit set).

Null Set – a set having no element. Also called empty set or vid.

Universal Set – a set U is called a universal set, if all the sets under discussion are subsets of the set U.

Since, set A and B are subset of these set C, the set C is the Universal Set.

Equal Sets – two sets A and B are said to be equal if:

Equivalent Sets – two sets A and B having equal number of distinct elements are said to be equivalent sets.

Since, both sets have the same number of distinct elements, the two sets are said to be equivalent sets.

CARDINAL NUMBER OF A SET

The number of distinct elements in a set A is called Cardinal Number or its Order and is denoted by n(A).

Union – the union of sets A and B, denoted by A ⋃ B, is the set of elements which belong to A or B or both A and B. It is one of the fundamental operations through which sets can be combined and related to each other.

Intersection – the intersection of sets A and B, denoted by A ⋂ B, is the set of elements which belong to both A and B.

If a and B do not have any element in common, that is A ⋂ B = ⌀, then A and B are said to disjoint.

Difference – the difference of sets A and B, is the set of elements which belong to  A but not B.

Complement – the complement of set A, denoted by Ac, is the set of elements which belong to the universal set but not to the set A. 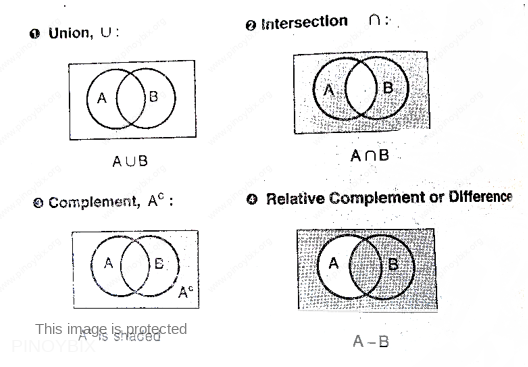 A club of 40 executives, 33 likes to smoke Marlboro and 20 like to smoke Philip Morris. How many like both?

Let: x = number of executives who likes to smoke both Marlboro and Philip Morris.

x = 13, number of executives who likes to smoke both Marlboro and Philip Morris.

LAWS OF THE ALGEBRA OF SETS