This is the Multiple Choice Questions (MCQs) in Chapter 3: Measuring Devices from the book Teach Yourself Electricity and Electronics, 5th edition by Stan Gibilisco. If you are looking for a reviewer in Electronics Engineering this will definitely help you before taking the Board Exam.

1. The force between two electrically charged objects is called:

2. The change in the direction of a compass needle, when a current-carrying wire is brought near, is:

3. Suppose a certain current in a galvanometer causes the needle to deflect 20 degrees, and then this current is doubled. The needle deflection:

4. One important advantage of an electrostatic meter is that:

7. An ammeter shunt is useful because:

8. Voltmeters should generally have:

9. To measure power-supply voltage being used by a circuit, a voltmeter

10. Which of the following will not cause a major error in an ohmmeter reading? 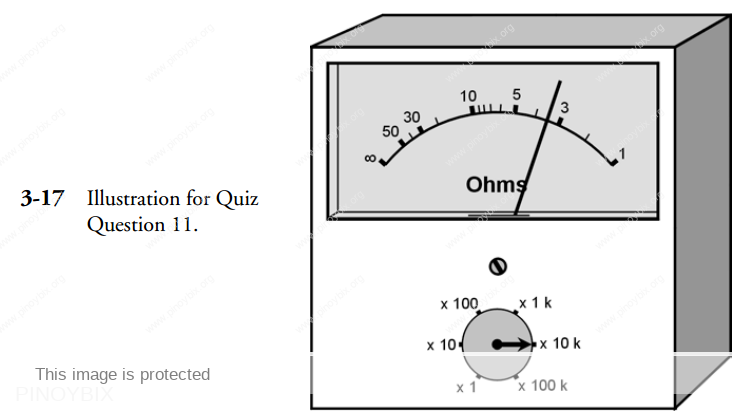 12. The main advantage of a FETVM over a conventional voltmeter is the fact that the FETVM:

13. Which of the following is not a function of a fuse?

17. A VU meter is never used for measurement of:

18. The meter movement in an illumination meter measures:

19. An oscilloscope cannot be used to indicate:

Complete List of Multiple Choice Questions from this Book

Multiple Choice Questions in Teach Yourself Electricity and Electronics